The Programs: The Dublight Zone, Episode 1 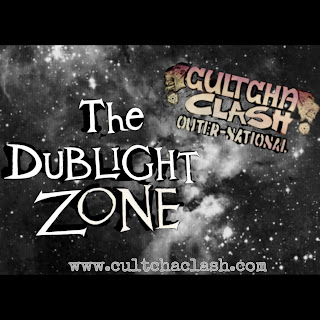 This is the latest edition in the  reboot of Vinyl Encounters of the...Rewind! (see original video episodes Here), my blog about music, records and the artists who make them.


For this edition, I will break down the premiere episode of the latest original program from CULTCHA Clash Outer National - Global-Community-Radio, entitled... The Dublight Zone.

The Dublight Zone is a two-hour show which will air weekly. It features Dub Alternatives & Abstractions, as well as Dancehall and the Roots of Version. The premiere episode aired on October 30, 2019 and here's what I played...


The first tune of the show is "Free" by The Moody Boys, from their 1990 XL Recordings EP, Journey Into Dubland.

Easy Star All-Stars are next up, from their Pink Floyd reconstruction LP, Dub Side Of The Moon, with "Time," featuring Corey Harris & Ranking Joe.

Next, comes a duo of tunes by The Bug with the same riddim, "Louder" features Flowdan and lyrical legend, Daddy Freddy, takes the mic for "Kill Dem." Both tunes are from the 2013 Ninja Tune 2 x 10" set, Filthy.


Old-school breakbeat techno classic, "On A Ragga Tip" by SL2, comes next. It was released in 1992 as the On A Ragga Tip 12" on XL Recordings.


Congo Natty aka Rebel MC hikes the tempo with "UK All Stars," from his Jungle Revolution LP, released in 2013 by Big Dada Recordings.

The final tune of the first segment is The Orb's "Perpetual Dawn (Solar Flare Mix)" from the 1991 Perpetual Dawn 12" on Big Life.


The first tune is from Jah Wobble's Bedroom Album, released in 1983 on Lago Records (UK), "Invaders Of The Heart," experimental-world-punk-dub from P.I.L.'s original bassist.

Creation Rebel  are next, with "Starship Africa (Section 2)," from their 1980 4d Rhythms release (recently reissued by On-U Sound), Starship Africa.

"Far Away Chant" is by African Head Charge, from their 1981 debut LP, My Life In A Hole In The Ground.


From the 1981 Greensleeves LP which was engineered by Henry "Junjo" Lawes, Scientist Rids The World Of The Evil Curse Of The Vampires is "Voodoo Curse."

"Originality" is by Thievery Corporation featuring Sister Nancy, it's from the Originality 12", released in 2006 by Eighteenth Street Lounge Music.

Next, from the John John Records label is "Tight Clothes Version" aka the Koloko riddim, from the 1996 Step In My Room 7" by Sanchez.

The final song is "Sly (Eternal Feedback Dub)" by Massive Attack, remixed by Mad Professor for the 1994 Sly 12" single.


Thank you for checking out this edition of Vinyl Encounters of the...Rewind! and don't forget to tune in to CULTCHA Clash Outer National - Global-Community-Radio for The Dublight Zone, every night at 10 pm.

Posted by Cultcha Clash Outer National at 1:44 AM No comments:

Vinyl Encounters Of The... Rewind!